Every player on the pitch, goalkeepers included, work in concert with each other to simultaneously generate shots for their team and prevent the opposition team from generating shots. But, not all shots are created equal; a shot from the corner flag does not have the same probability of resulting in a goal as a shot from the penalty spot. This model, much like other “expected goal,” or “xG,” models, attempts to quantify the likelihood that a given shot results in a goal.

During a match, all of the players on a team work together to generate shots for their team and prevent shots from the opposition team. I assume, as is the basis of the Leviathan model, that all of the outfield players on the field equally affect both their team’s ability to generate shots and prevent the opposition team from generating shots. In addition, I assume that goalkeepers affect their team’s and the opposition team’s shot creation, though I assume that their impacts have a much smaller magnitude than those of the outfield players. Every action on the field leading to a given player’s decision to take a shot is, therefore, the product of the ability of all of the other players on the pitch. The probability that a given shot, which has been generated by the actions of all of the players on the pitch, results in a goal at the exact moment that the shooter decides to take the shot is the “expected goal probability,” or simply “xG.”

In addition to the xG of the shot itself, which is determined by a number of shot factors, such as shot type, shot location, and last action prior to the shot, the individual shooter can affect the result of the shot by either shooting accurately or failing to hit the target entirely, an ability that I quantify as “shooting impact on goal probability.” In addition, the goalkeeper can affect the probability that a given shot results in a goal after the shot is taken by having quick reflexes or by being woefully mispositioned, an ability characterized as “goalkeeping impact on goal probability.”

All players work to generate a shot, the shooter shoots the ball, and the goalie attempts to save the shot.

Using all of the shots taken in a given season, such as the 2014-15 EPL season, as inputs, I model the probability that a given shot will result in a goal linearly and fit the model with a generalized ridge logistic regression. I use a design matrix \(X\) for all shots taken with a player’s foot and a design matrix \(Z\) for all shots taken with a player’s head where each row is an individual shot with the following columns (I use two separate design matrices \(X\) and \(Z\) based off of the assumption that certain players may be above average finishers with their feet, but may be below average finishers with their head, and vice versa): 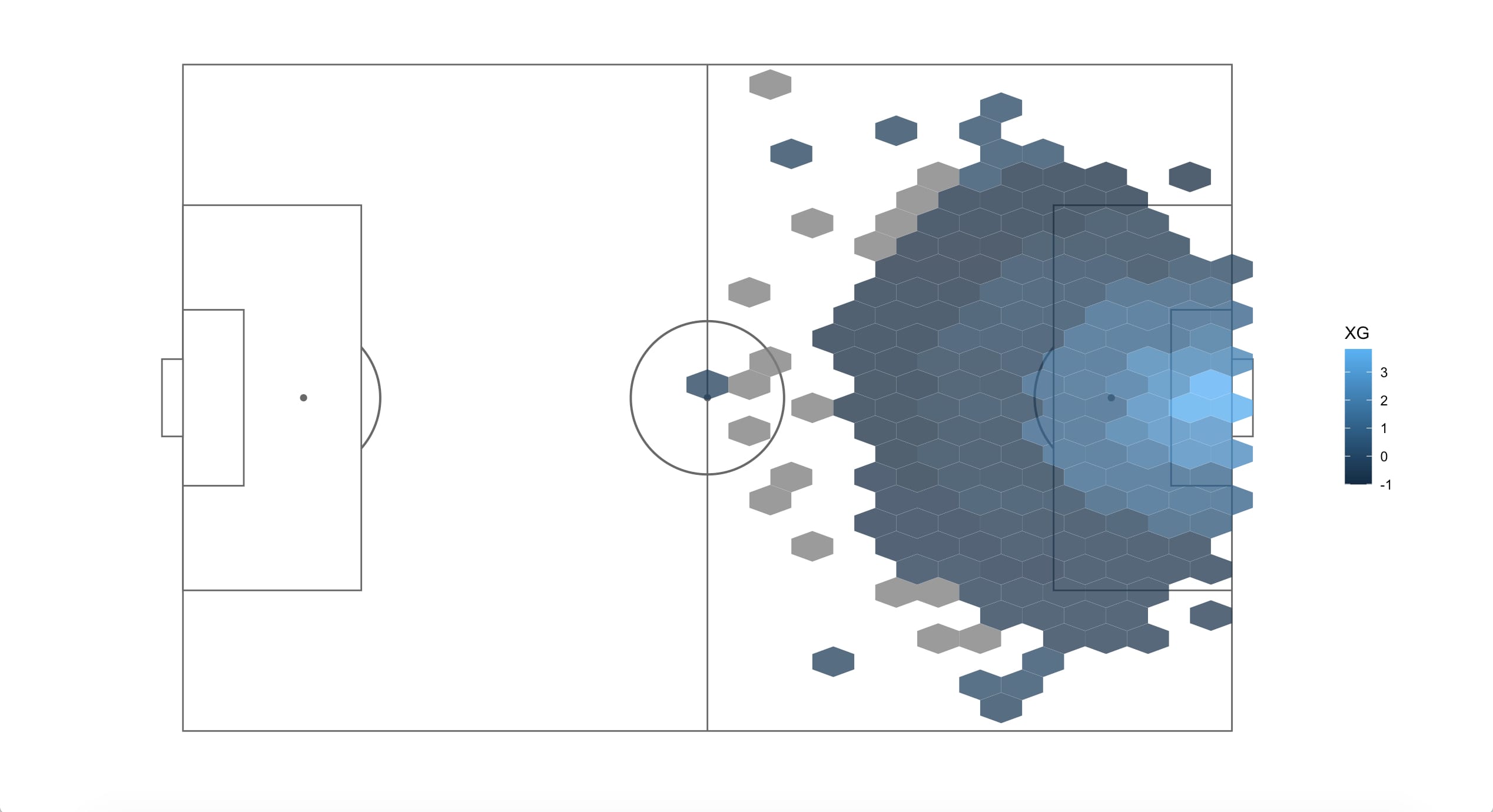 In summation, this is an xG, or expected goal, model that quantifies the probability that a goal results from a shot, given the shot’s various characteristics. This model is used as the basis for determining both an outfield player’s “shooting impact on goal probability” and a goalkeeper’s “goalkeeping impact on goal probability.” Finally, the expected goal probability of a shot, given the shot’s characteristics, but excluding the goalkeeper and shooter, can be used to quantify the quality of shots generated by a team, regardless of the goalkeeping and shooting ability of the team’s players.